By: Sam C. Smith
In: Daily Proverb
With: 2 Comments 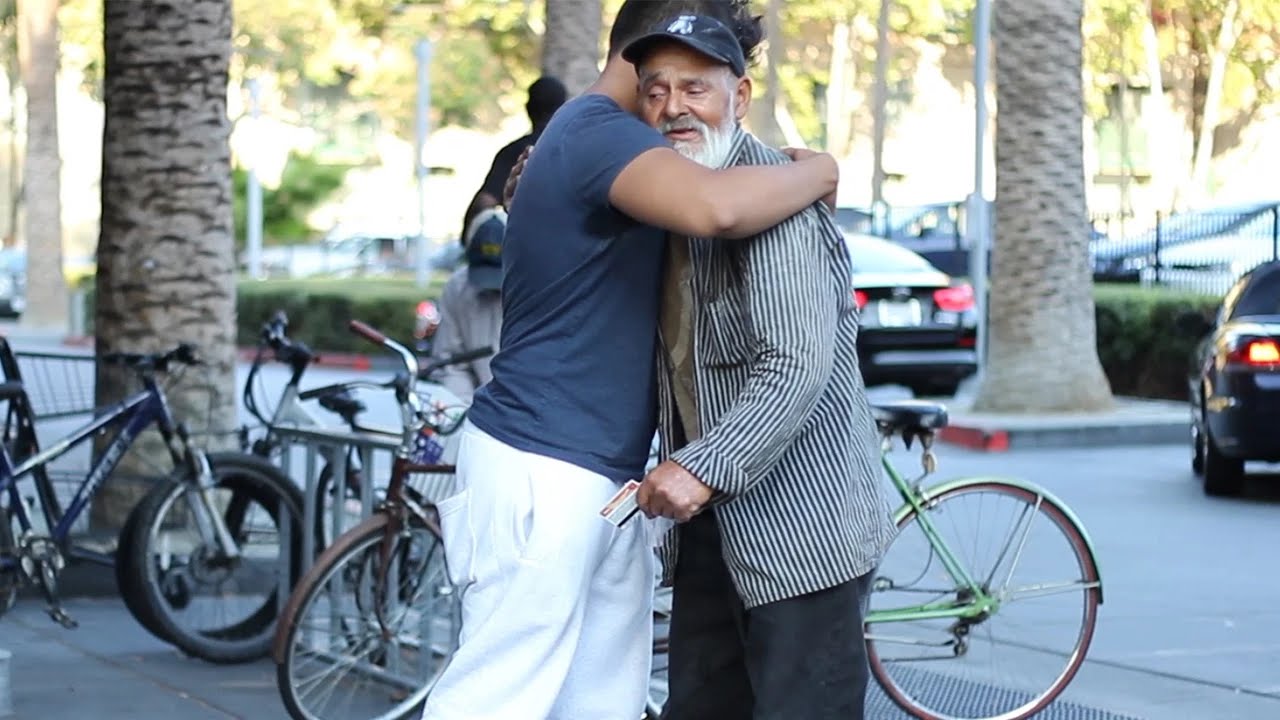 31 Whoever oppresses a poor man insults his Maker,
but he who is generous to the needy honors him.

About three years ago my family and I were walking through an urban, downtown, outdoor retail mall.  I was weaving in-and-out of heavy pedestrian traffic, family in tow, ignoring most everything that we passed.  I had a destination in mind, and as a result was “seeing” nothing along the path except that destination.  My youngest son Matthew, age seven at the time, on more than one occasion attempted to slow me down so that I could “notice” what he was “noticing.”  But I was undeterred.  I ignored him as easily as I ignored all the other surroundings.  We made it to our destination (to this day I can’t even remember where that was), concluded our business, and began our return trip up the mall.

This time however, Matthew employed a new tactic; get mom to stop, and then dad HAS to stop (the kid is pretty smart).  What we were stopping for was a homeless woman sitting on a bench.  She however was not your “average” looking panhandler or beggar.  When we stopped and Matthew pointed her out, I realized my subconscious HAD noticed her on our first trip down the mall and I thought she actually looked dead.  She was in no different condition on this second trip past her bench.  She was slouched down in the bench, head fallen completely forward, propped on the armrest.  It was a warm, late summer day, but she was wearing a black hoodie which was pulled up over her head so that you could see only her cheeks, chin, and neck.  Her sleeves were pushed up exposing her dirty hands and forearms potted with sores, some of them looking “open” or like infected needle track marks.  You could see a few of these sores on her lower face and neck as well and there were more than a handful of flies circling around her head and torso.  The only indication that she was in fact “not dead,” was her arms and legs were in different positions relative to the first time we had passed by.

So now we are stopped, about 20-30 feet from this woman, and Matthew lets me know what he has already informed his mother of.  Someone needs to help this woman and that someone is going to be us.  A side note about Matthew, he has a heart for the poor, the destitute, the disadvantaged, and/or the “under-resourced.”  He “SEES” them all.  He wants me to STOP for them all.  Back to the story, Matthew says to me, “we need to give her some money.”  I foolishly respond back to him, “well how much do you want to give her?”  He fires back immediately, “how much you got?”  At this point, I did something completely uncharacteristic, I opened my wallet and gave all the money I had to him.  I didn’t even count it.  I cant even explain how out of character this was for me.  Prior to this I can only recall giving change to someone twice in my entire 40 years.  Moreover, I can recall times when I have mocked those on the street asking me for money or assistance; not my proudest moments.

Now with money in hand, by himself, Matthew makes his way over to her (remember he is only seven).  She is not “actively” begging.  She has no can, or cup, or hat in which she is collecting money.  This I had not noticed until it was much to late.  You see, I figured Matthew would just run over, drop the money off, and we would be on our way.  THAT IS NOT AT ALL WHAT HAPPENED.  He gently touched her arm, the one covered in dirt and potentially open soars.  Her head raised enough to almost see her eyes from a distance and she opened her hand.  Matthew “folded” the money from his hand into hers and then proceeded to enter her personal space, getting between her legs, hugging her around the neck.  I entered full panic mode.  Ya’ll I am a germiphobe.  I am an obsessive hand washer.  I cant even pass by a bathroom without having a compulsive desire to wash my hands.  At this point I am ready to  run over, grab him up, and rub off the first couple layers of his skin with a Brillo pad.

In this moment, MY life changed.  Prior to this day, I had only had one deeply personal experience with God, where He reached down and touched my soul.  This became the second.  I made that first initial step to run and grab Matthew, to save him from what was sure to be a trip to the ER with some kind of bizarre flesh eating disease, but I was stopped in my tracks.  I was physically unable to move.  The mall, flooded with hundreds if not thousands of pedestrians, was immediately silent and motionless.  I watched the interaction through what appeared to be a sheet of thin water being poured down in front of me.  It was like Matthew and I were on opposite sides of a waterfall, but I could see everything that was happening.  As Matthew hugged her neck, the woman very briefly embraced him around his waist, spoke just a few words to him (which he has never shared with me), and as quickly as it began the encounter ended.  Or so I let it seem!

For more than two years I never told anyone about that day, or that event, and how it impacted me.  How it convicted me.  Not my wife, not Matthew, not anyone.  During that two-year period, as I was holding the event close to my heart, thinking about it daily, meditating on the “secret” God had presented to me.  He spoke to me, not in audible words but by a message He had written on my heart and knowledge He imputed into my head:

“You have been TELLING THEM who I am, today I am SHOWING YOU who I am.”

Again, for two years this just marinated around between my heart and my head.  What was I supposed to do with this “information?”  Maybe nothing?  Then about 8 months ago in a small group bible study we read through the parable of “the least of these” in Matthew 25:40-45:

40 And the King will answer them, ‘Truly, I say to you, as you did it to one of the least of these my brothers, you did it to me.’

41 “Then he will say to those on his left, ‘Depart from me, you cursed, into the eternal fire prepared for the devil and his angels. 42 For I was hungry and you gave me no food, I was thirsty and you gave me no drink, 43 I was a stranger and you did not welcome me, naked and you did not clothe me, sick and in prison and you did not visit me.’ 44 Then they also will answer, saying, ‘Lord, when did we see you hungry or thirsty or a stranger or naked or sick or in prison, and did not minister to you?’ 45 Then he will answer them, saying, ‘Truly, I say to you, as you did not do it to one of the least of these, you did not do it to me.’

And there it was.  My wrestling match with God was coming to an end.  I had read this passage several times before.  But this time I was reading it with “the event” replaying right in front of me in that small group.  Matthew hugging her neck, she lifting her head speaking to him, and me observing it all through the “waterfall.”  All the while hearing, “You have been TELLING THEM who I am, today I am SHOWING YOU who I Am.”  Like that, my two-plus year “vow of silence” was over.  I just blurted out the story to my small group and as I did it was reveled to me that the two-year waiting period was not a waiting period at all.  It was a period of learning and understanding.  The Lord was “breaking my heart for what breaks His” so that I could effectively share with you now that which I have shared with dozens of others over the past several months.

My heart had been hardened to “the least of these.”  I did not “see” them the way that Christ “SEES” them, or even the way Matthew “SEES” them.  Matthew didn’t see dirt, open sores, track marks, flies, or shame.  Matthew saw HER, more the way Jesus saw her, and he wanted to LOVE HER the way he knew Jesus would LOVE HER.  What did I “see?”  Simply put I saw the “I Am.”  I saw a reflection of Jesus in that interaction between my seven year old son and a destitute homeless woman.

There are a few interpretations of the Matthew 25 parable.  We won’t get into those now as that is not my purpose.  My purpose in sharing this story is to testify to the glory, goodness, and loving character of Jesus Christ.  Regardless of the interpretation, an underlying theme is shared between them all.  The righteous will inherit the Kingdom NOT because of compassionate works, our salvation is not dependent on works.  Rather, the Kingdom inheritance advances because their righteousness grew from a transformed heart in response to Jesus, as reflected by their compassion for the “least of these.”  It is here that we come full circle back to Proverbs 14 – Our service to the poor, to the “least of these,” is not ultimately to the poor.  Our service and honor is to Jesus Christ himself.