By: Sam C. Smith
In: Today's #RadicalWords
With: 0 Comments 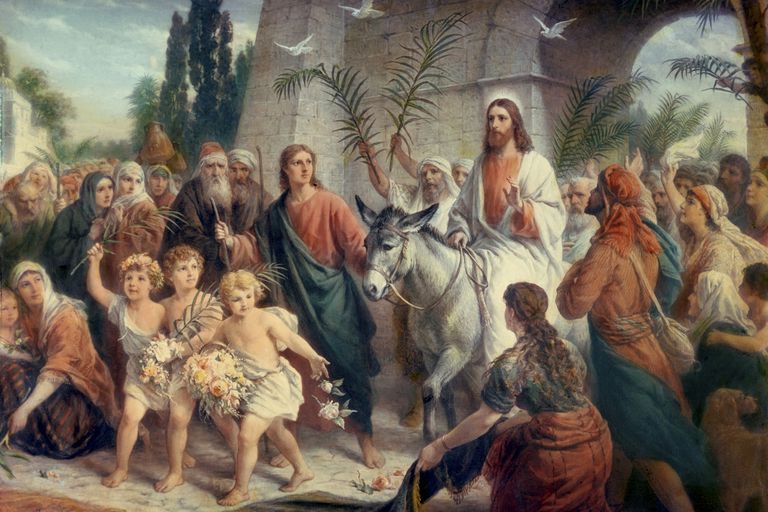 The Triumphal Entry: The people greeted Jesus with much fan-fare and enthusiasm.  They covered his path with their cloaks and palm branches and waved palm branches in the air, singing:

“Hosanna to the Son of David! Blessed is he who comes in the name of the Lord!  Hosanna in the highest.”

21 Now when they drew near to Jerusalem and came to Bethphage, to the Mount of Olives, then Jesus sent two disciples, 2 saying to them, “Go into the village in front of you, and immediately you will find a donkey tied, and a colt with her. Untie them and bring them to me. 3 If anyone says anything to you, you shall say, ‘The Lord needs them,’ and he will send them at once.” 4 This took place to fulfill what was spoken by the prophet (Zechariah 9:9), saying,

5 “Say to the daughter of Zion,
‘Behold, your king is coming to you,
humble, and mounted on a donkey,
on a colt, the foal of a beast of burden.’”

7 And they brought the colt to Jesus and threw their cloaks on it, and he sat on it. 8 And many spread their cloaks on the road, and others spread leafy branches that they had cut from the fields. 9 And those who went before and those who followed were shouting, “Hosanna! Blessed is he who comes in the name of the Lord! 10 Blessed is the coming kingdom of our father David! Hosanna in the highest!”

39 And some of the Pharisees in the crowd said to him, “Teacher, rebuke your disciples.” 40 He answered, “I tell you, if these were silent, the very stones would cry out.”

16 His disciples did not understand these things at first, but when Jesus was glorified, then they remembered that these things had been written about him and had been done to him. 17 The crowd that had been with him when he called Lazarus out of the tomb and raised him from the dead continued to bear witness. 18 The reason why the crowd went to meet him was that they heard he had done this sign.

The multitudes in Jerusalem did not yet fully understand Christ’s mission.  Nevertheless, they enthusiastically honored and worshiped Him believing that he was the promised Messiah from Zechariah 9:9.  Those crying out “Hosanna” were literally crying out “Save now” or “Save, we pray,” and the palm braches they were waving symbolized goodness, peace, and VICTORY.

Jesus traveled to Jerusalem knowing that His journey would end on the cross, His body bloodied and broken for the sins of the world, but through this VICTORY he would crush the head of the enemy.  The best part of Passion Week, for those of us who call Jesus Lord and have been saved by grace through the blood of Christ, is that HIS VICTORY is also OUR VICTORY.  Jesus paid the total price on the cross so that we could all live free – His journey to the cross starts today, Palm Sunday.  Hallelujah!